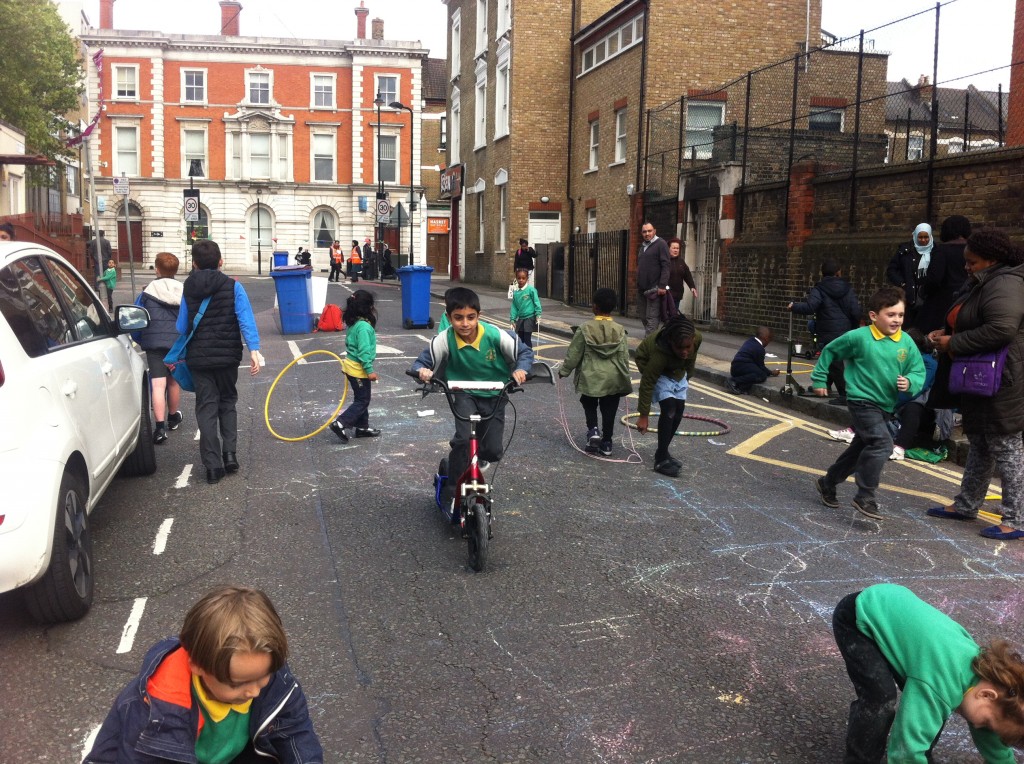 Play stopped traffic outside Princess May School – as pupils reclaimed the street for hula hooping, skipping and games!

Around 150 children and 60 adults took part in the Play Street Session. The school based in the Stoke Newington/Dalston borders, is hosting four sessions per year and is one of three Hackney schools that have applied to run them regularly. Since Hackney Council’s introduction of Play Streets in September 2012, 24 streets have applied to run regular play street sessions.

Kome Owuasu, said: “Street play provides the opportunity to all children to have the freedom to explore their area, to enjoy and participate in space for free play, independently in front or near their own front door and school, contributing to a healthy lifestyle.

“It was good to see children, parents and residents playing outside which help families get to know each other and creates a greater sense of community spirit. A big thank you message to all residents and parents that came out to show their support, provided free snacks and who volunteered as stewards.”

Claudia Phillips, Vice Chair of the Claudia Jones Organisation added: “By closing the street we are giving a very clear message that play is important and that creating this space allows children to become at one with their environment and be seen as important members of their community.”

Parents volunteered to ‘steward’ the road closure – standing at the barriers and redirecting through-traffic. People living on the street also helped with stewarding and joined in the fun.

Halima Begum, who’s two children attend the school, said: “It was fun doing the stewarding and nice to be able to help out. My children were very excited when they came out and saw they could play in the street then and there with their friends. They loved riding up and down on their bikes and doing the chalk drawing. Afterwards all they wanted to know was: When can we do it again?”

Mum of four Carlene Lutin said: “I enjoyed it because the children could play freely and there were no cars about. I really liked playing together with the children with the chalk and the hopscotch.”

Residents living in the closed off stretch were allowed vehicle access, driving at walking pace and escorted by a steward once children had been cleared from the street.

Hackney was the first London borough to adopt a Play Streets scheme, and only the second place in the UK after Bristol. Several London boroughs have now followed Hackney’s lead – including Haringey, Southwark and Enfield.

Hackney Play Association, working in partnership with Playing Out, offers support and guidance to anyone in the borough wishing to start street play sessions. Call 07947 095069 or email hackney@playingout.net, and go to http://playingout.net/ for lots of useful information and free resources to help get you started.