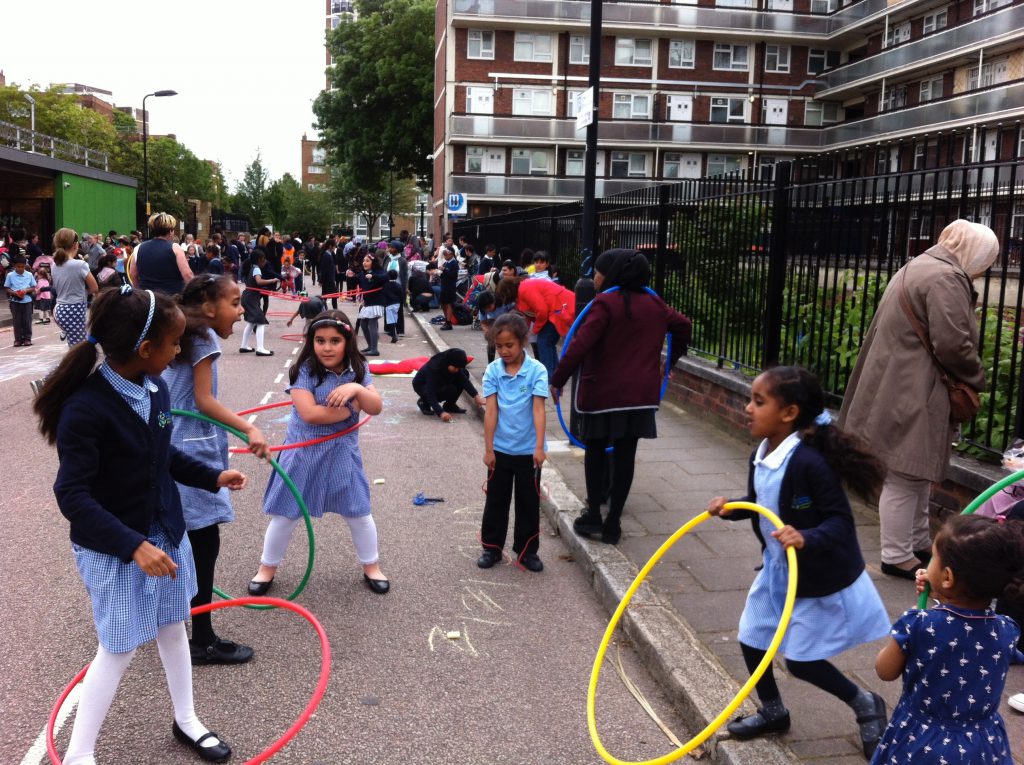 Pupils at Thomas Fairchild School in Hoxton pupils reclaim their street for play! 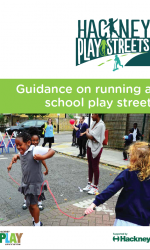 We would love to help more schools get involved. Our new guide for schools is available – download it here along with more useful tools. Contact us to be sent a free hard copy or for a chat about starting up. Email us at: playstreets@hackneyplay.org

Great reasons to get involved

Why do it? A headteacher’s perspective 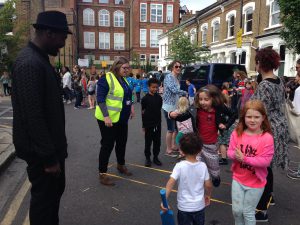 Being part of the community is so important to us a school and this seemed a super way to engage with the wider community and have some fun! It also provides the school with the opportunity to chat informally with parents and local residents about what we do ( and the weather and lots of other things!)

Q2. How have you found taking part – what are the highs and lows?

There are no disadvantages to play streets. It is such a super event! The highs are playing with children and talking with parents. We have also been able to meet the local community police officer, as well as officers from the Met, who came along to see what we were doing. We have been able to take those conversations to make future links for the school, which will only benefit our children. 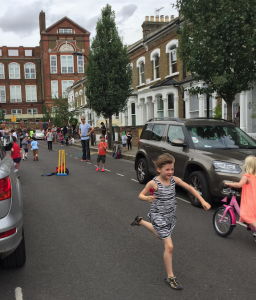 Q3. How do the children and parents respond?

The children are always hugely excited when we announce that Playstreet is happening! They have the opportunity to play freely and safely in areas that are usually not available and they can meet and play with other children who might not come to our school. They have also enjoyed finding out about and playing traditional playtime activities, such as French skipping and Tug o’ war! It is an opportunity for parents to take time out and get to know each other. Sometimes pick up at 3.30pm can be a very busy part of the day and parents don’t get the time to talk to each other. Parents can also talk to staff in an informal setting, thereby strengthening and building relationships.

Q4. Would you recommend doing play streets to other heads ?

Absolutely. Participating in play streets has been another avenue of communication between school and the community. Strong communication and relationships are crucial to every school. They enhance parents’ trust in and mutual respect of the education process. It is vital that home and school work together, as parental support plays such a vital role at all stages of a child’s education. 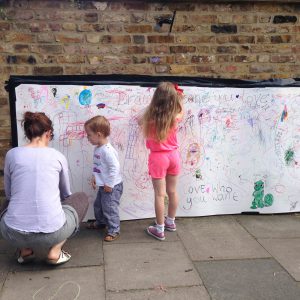 “Low maintenance yet the rewards are immense,” Anthea Anka, parent organiser at Thornhill

Anthea Anka is on the parents committee at Thornhill Primary School in Islington and helped run the school’s first play street in June 2016.

We all felt that it was an incredible opportunity not only to bring the school together where parents and children could interact in an organic way, but also involve the community as a whole.

Q2. How did people react to the idea during the consultation?

Most of the reactions were incredibly positive and people were curious as to what the play street entailed. Thornhill parents seemed genuinely excited by the possibility and immediately took to the idea. Many residents seemed nostalgic themselves talking about when children were able to play on their street safely and there was more of a sense of community. We had a few concerns here and there from the residents in regards to their cars, coming and going, but once explained, most residents were very supportive of the idea.

The kids simply took to it like fish to water. There was such an excitement on their part to be able to simply walk out of the school gates and play in the street and it was a joy to watch. From a parent’s perspective, watching the freedom of the children and the organic activities such as hopscotch and chalk drawing was so rewarding.

Q4. What do you think the benefits are for schools hosting play streets?

I think there are many benefits. It brings everyone closer together as a school community. It enables the children the freedom to feel as if they can break the rules a bit and abandon the usual routine. There is a definite liberation in being able to play in the street, that children ordinarily do not have. Also, it is a great opportunity for everyone to catch up, socialise and engage with their children in a fun and relaxed setting.

Q5. Would you recommend it to other schools?

Definitely! There are so many positives and so much fun to be had, and as far as an activity for a school to put on, it is very low maintenance and yet the rewards are immense.

Email playstreets@hackneyplay.org and download our free guide for schools here.

Playing Out, the national organisation which pioneered the ‘playing out’ model of street play – adopted in Hackney. Playing Out supports anyone wanting children to play out more, offering free support and resources.

I Like Clean Air, London children and parents fighting pollution in the Capital

Sustrans, national charity campaigning to make it easier for people to cycle and walk

Living Streets, the UK charity for every day walking

Back to Hackney Play > 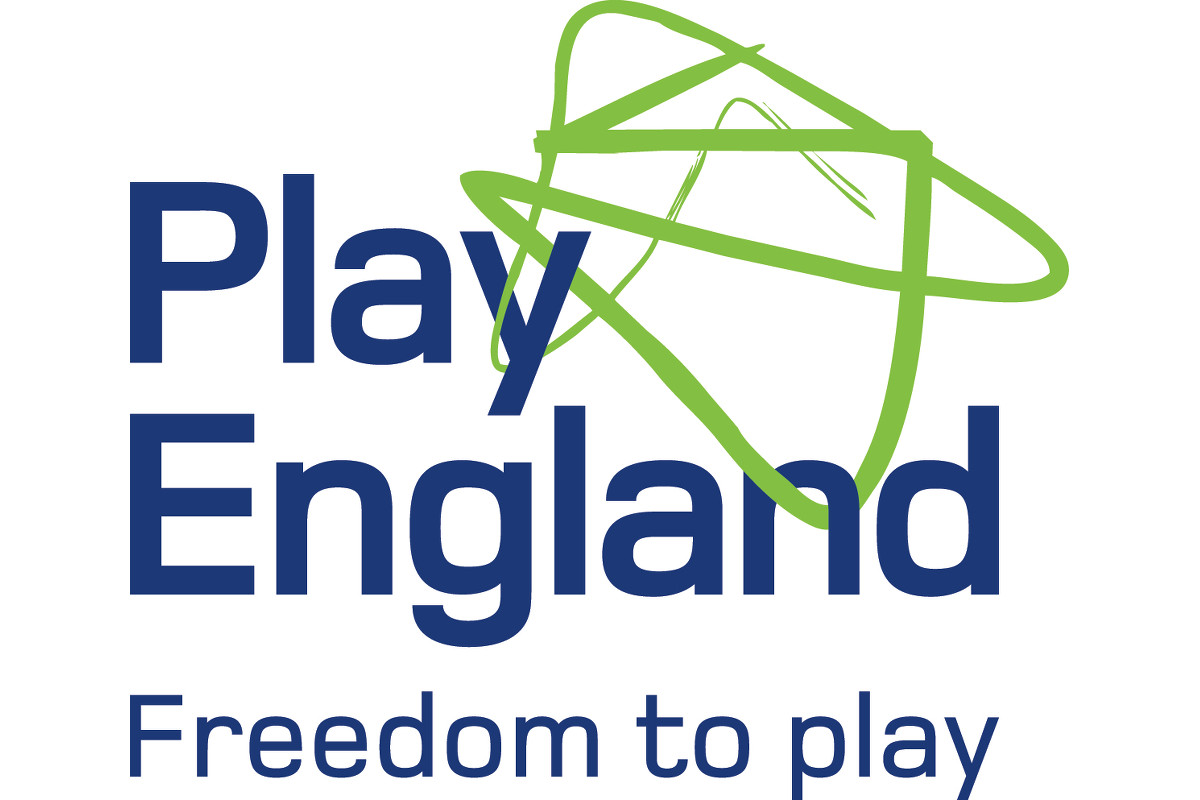